How much does a boo dog cost? (Pomeranian Boo) 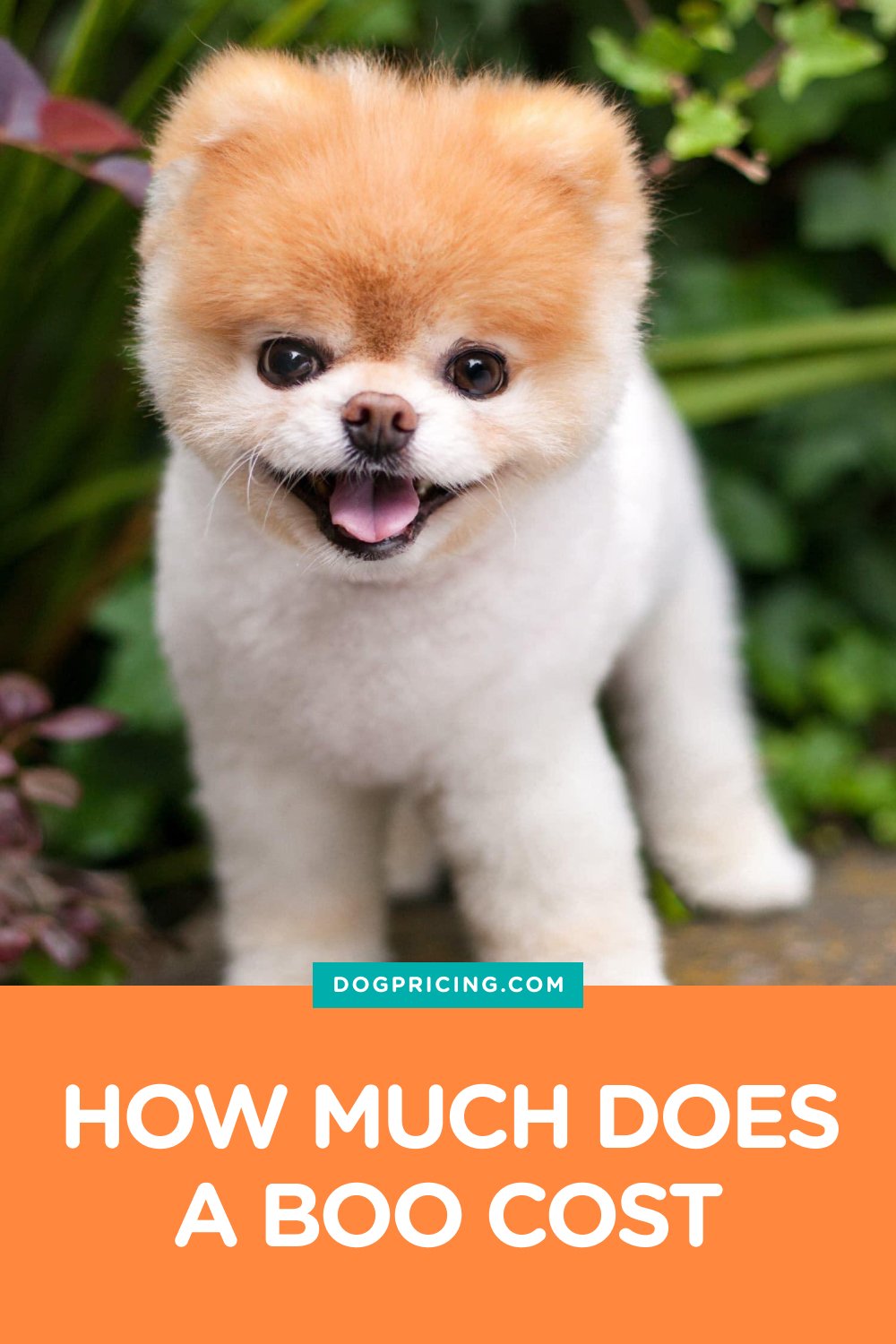 Boo (Pomeranian Boo), usually regarded as one of the cutest dogs in the whole world, has been an Internet celebrity for several years. As of September 2017, Boo had amassed more than 18 million followers on Facebook and was widely regarded as the most well-known canine globally.

In this post, we will discuss the history of Boo and show the pricing of a Boo dog, which includes all of the expenses that are associated with owning a Boo.

The tale of Pomeranian Boo

On March 16, 2006, Pomeranian Boo was born in the city of San Francisco. Boo, like all other typical Poms, was born with a coat that is initially dense, long, smooth, and glossy.

On the other hand, PomeranianBoo’s owner made the decision in 2009 to carefully clip his hair. Since the beginning of 2010, PomeranianBoo has maintained a fan page on Facebook.

Despite this, he did not become well known until Oct 2010, when the singer Ke$ha announced on her Twitter account that she had a new lover and included a link to Boo’s fan page in the message. Pomeranian Boo shot to fame very quickly after that, and even for the few months that are left in 2010, the number of likes on Pomeranian Boo’s fan page has reached close to one million.

By the middle of 2011, Pomeranian Boo had amassed 5 million likes on his fan page, and he had become a phenomenon across several social networks.

What kind of breed is Pomeranian Boo?

It is a common misconception among younger people that Pomeranian Boo is a new dog breed due to his distinctive look; however, this is not the case.

Pomeranian Boo is the name of a particular Pomeranian dog breed that has its hair cut in an adorable circular shape.

The round hairstyle that Pomeranian Boo debuted in 2010 and continued to popularize in 2011 has continued to be a popular choice for many canine breeds even up to the present day.

Although Boo is a Pom, remember not every Pomeranian has the potential to become Boo. In order for these Poms to be considered Boo, they need to have bear faces.

This implies that their fur has to be long and thick, their faces need to be round, and their muzzles need to be short. Classical Poms have long faces and long muzzles.

When you have already chosen the Pomeranian Boo, you will need to accompany him to the spa so that his coat may be trimmed to have a short fur and a circular Boo coat. Following style, you will need to trim Boo’s coat twice per month in order to maintain the short length.

However, what about the present time? Is this dog deserving to be part of the modern community we live in? If so, How much does a Boo dog cost? Or What are the traditional Pomeranian dog prices?

Adopting a nice Pomeranian Boo rather than purchasing one, which usually costs between $300 and $400, is another handy alternative to getting this dog breed.

Aside from that, the initial expenditures for this breed are around $6,000 for the first year (this amount includes the purchase of the puppy), and after that, they will average about $3,000 for the subsequent years.

It is estimated that the entire costs associated with owning a Boo dog throughout the course of the dog’s lifetime will be close to $30,000.

Where can you adopt Boo puppies?

The most simplistic solution would be to acquire a Boo dog or puppy through the services of a rescue group that focuses specifically on this breed of dog.

You may begin your search for new Boo dog pups by doing a local search for breeds on Google. This is a beautiful method to get started. The search results will include all of the Boo that is now accessible in your area.

See also  Maltipoo Price - How much does it really cost?

If both of the Boo dog’s parents are purebred dog breeds of show quality that originated from a respected breeder, then the price of the Boo dog will be significantly increased.

These breeders also typically spend more money than other owners do in order to ensure the health and welfare of their breeding Boo dogs.

The coloration of the fur and markings

The cost of a Boo might change depending on the color and kind of its coat.

In general, Boo dogs are classified as belonging to the group of breeds known as double-coated dogs. Therefore, the cost is also determined by the coat type and the color.

Pedigree or other proof of registration

There are kennel clubs, and some breeders are members of certain kennel clubs. If Boo is a member of any national or international Kennel Club, its price may increase significantly.

Location of the Buyer

The cost of Boo dog price in the region will be determined by several factors, including supply and demand.

Purebred or a hybrid

When compared to the cost of purebred Boo dogs, the cost of mixed-breed Boo dogs is typically lower. This formula applies to almost all dog breeds.

Some Pomeranian Boo Dog breeders decide to put their canine offspring out for sale once they have had sufficient time to be socialized and trained.

It will result in an increase in the cost of the puppy. Still, in the long run, it will save you money because it will decrease the probability that you will have to spend extra money on Boo’s training, and it will increase the possibility that the pup will grow up to be well-mannered.

Although it will increase the cost of the Pomeranian puppies, it will save you money in the long run.

Those in the breeding business who take it seriously will have their breeding Boos and pups checked out by veterinarians and have them tested for various ailments and conditions. This process indirectly increases pomeranian dog price.

In addition, some owners may take their puppies to the veterinarian before selling them so that the puppies can have a checkup, get treated for worms, receive immunizations, and have a microchip implanted in their bodies.

Even though this causes the price to go up, there is a far lower probability that Boo will be ill.

Conclusion: How much does a boo dog cost? 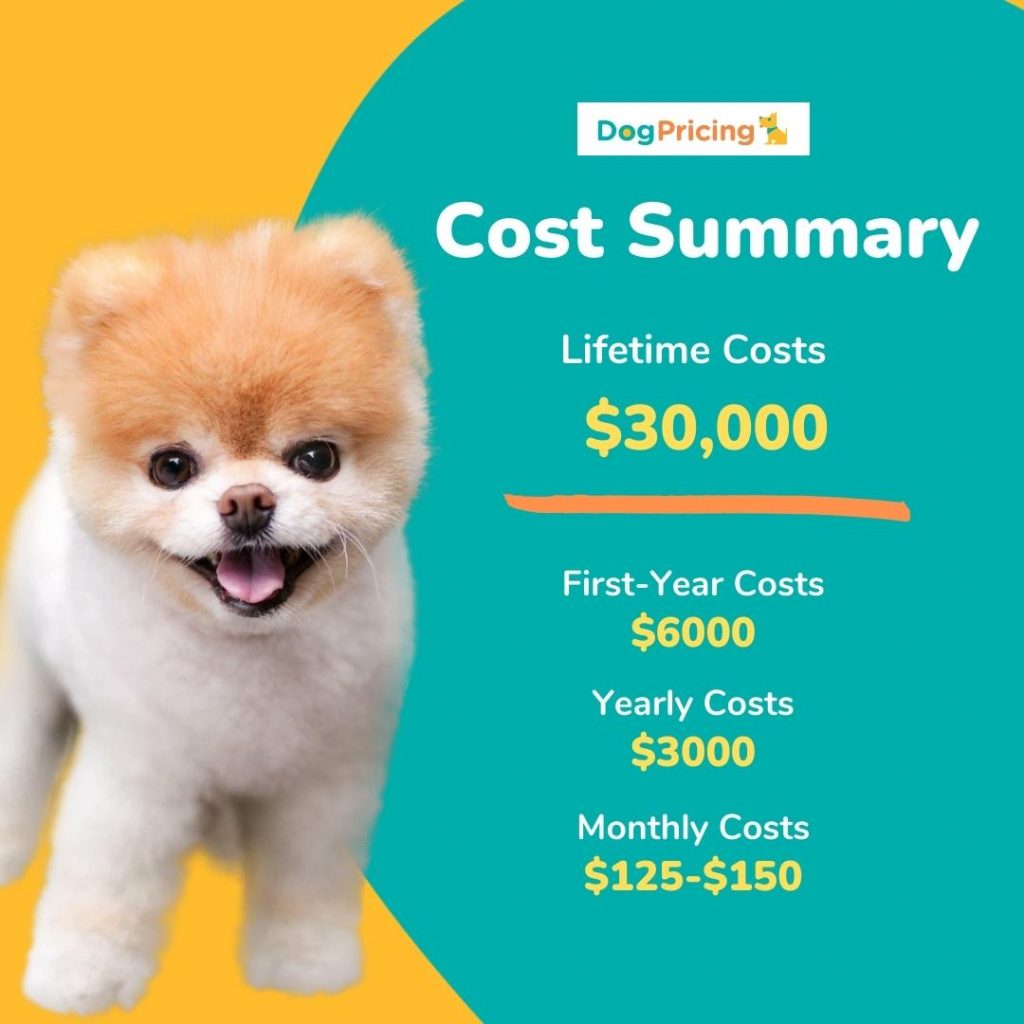 Boo dog cost price is around $1,200 to $2,200. The Boo dog cost is more than other canines because they are not very common, particularly in the United States.

The price may also change depending on the dog’s age, coat type, and whether or not you want a show-standard animal.

When it comes to showing standards or champion pomeranian puppies, the price might go as high as $3000.

Despite this, the Pomeranian boo dog is a breed known for its high level of endurance and love, so it is very famous among the young generation.

You can read more about Pomeranian costs in these articles: