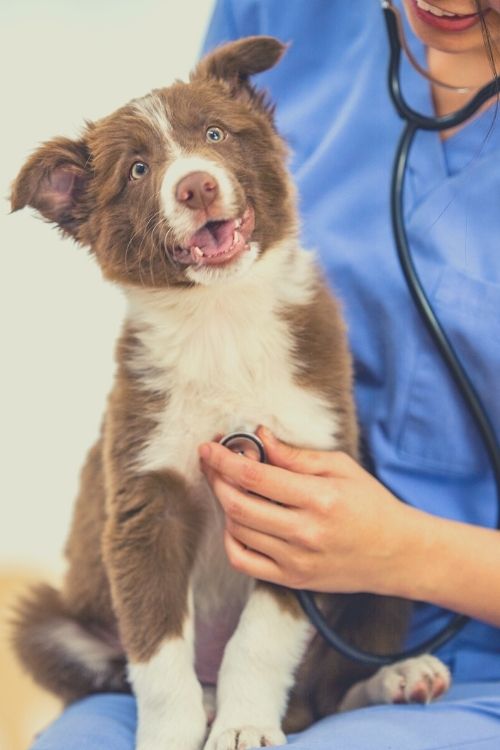 The business of breeding dogs may be somewhat challenging (due to the huge variation in the heat cycle, anovulatory cycle, breeding dates, and some other factors).

It is also one that demands you to be knowledgeable on a range of particulars concerning the health and wellbeing of your dog. If you want to know when the optimal time is to breed, getting your female dog’s progesterone levels checked is one of the most crucial things you can do.

If you miss this window of opportunity, it is possible that you may lose out on the prime years of a dog’s breeding life, which will result in a loss of money and a reduction in the number of magnificent dogs in the world. But what about its price? What’s the exact cost of a dog progesterone test?

The typical dog progesterone dog test costs around $80, but it can vary from state to state, clinic to clinic, and breed to breed. Additionally, one average vet visit usually costs around $150 in the US.

Typical Progesterone Cycle in the Bitch

Progesterone is a steroid hormone generated by the corpus luteum and, uniquely, by developing follicles in the uterus. Before, during, and after ovulation, plasma progesterone levels in a female dog follow a distinctive upward trend.

At the same time, granulosa cells continue to increase within the follicle that has not yet burst. Maximum concentrations are obtained between 22 and 32 days following the end of oestrus, regardless of whether or not the female is pregnant at this point in time. Following this point, there is a slow drop until basal levels are reached around 62–72 days following ovulation.

When there is a pack of animals, the majority of the females will go through the process of lactating irrespective of whether or not they have delivered their own pups, and they will be able to assist with feeding.

How to carry out a progesterone test?

Progesterone levels can be measured either in-house or in a laboratory. These are the two primary options.

The in-house tests are sold in packs of 5 or 10, and it is necessary to keep them in the refrigerator at all times. A color shift is a basis for these enzyme-linked immunosorbent assay (ELISA) assays, which are only semiquantitative. Instead of using a color chart, the manufacturers favor the tests that simultaneously run two different progesterone benchmarks alongside the sample.

The criteria for the elevated levels are established at 3-4 ng/ml, while the requirements for post-ovulation are set at 10-12 ng/ml. The tests may be relatively easy, although precision in their management and timing is essential.

The results of the tests can be obtained in under half an hour. The longevity of the tests can make it costly to preserve them, but the author discovers that the conjugates can have a longer life if they are frozen and then thawed in hot water before use. The standards, on their own, remain consistent over a considerable amount of time.

The laboratory tests can either be radioimmunoassays (RIA) or chemiluminescence assays via using a progesterone machine. The accuracy of laboratory testing is higher as compared to in-house tests, and more accurate forecasts can be produced because of the precision with which progesterone levels are measured.

In general, once progesterone levels begin to climb, they will double every two days as it continues to rise.

Ovulation and maturation are the two aspects that need to be addressed in order to calculate the number of days between matings. Ovulation occurs at a level of around 6-7 ng/ml (18-20 nmol/l).

Following ovulation, the oocytes need two further days to develop before a sperm or egg may fertilize them. After reaching maturity, they will retain their viability for an additional two days. It can take spermatozoa anywhere from 8-14 hours to reach the oviduct once they have fully matured.

Because the gestation period of a bitch is so much shorter than that of a human, it is highly crucial to be able to assess accurately when a pregnancy has reached its physiological conclusion, particularly in cases when medical intervention is required.

There is a significant risk of death for any puppies who are born earlier than 57-58 days following fertilization. The information that is provided to the veterinary surgeon might be highly ambiguous, even though the real duration of a pregnancy from the time of fertilization in the female dog is around 60 to 62 days.

Because several matings and extended sperm survival times in the reproductive system (up to one week) can make it exceedingly difficult to determine how many days pregnant the bitch is, it is essential to avoid multiple matings if possible.

It can be helpful, especially for dog breeders of tiny and medium-sized dogs, to be able to monitor their dog’s body temperature 2 – 3 times each day. The temperature will be a little unpredictable in the final week, although it will decrease by 2 degrees Celsius 12 to 24 hours before the pup’s birth.

The decline may not necessarily appear to be as pronounced in larger dogs. The decrease in plasma progesterone is the root cause of the fluctuation in core body temperature.

Progesterone levels in the plasma (extracted from a blood sample) drop to below one ng/ml in the 22-24 hours leading up to delivery. Because it is critical to get the answers right away, ELISA kits can be utilized for testing to determine whether or not ovulation has occurred.

The sample will have a darker hue than the low standard because it will have a lower progesterone concentration. The test can provide answers in as little as half an hour in situations when primary inertia is suspected. If the progesterone level is still high, the mother-to-be is not yet ready to give birth; however, the pups are prepared if the level is low, and a C – section can be tried.

If a cesarean section is chosen rather than naturally occurring (for example, in the instance of a single puppy pregnancy or a Bulldog), the progesterone tests may be performed each day leading up to the end of the pregnancy until a discernible decrease in progesterone levels is shown.

When it comes to the reproduction of female dogs, progesterone testing is an extremely helpful, low-cost ($80), and easily accessible technique. It is possible to use it at various stages of the breeding process. The results can provide information on the optimal times for mating and giving birth and some anomalies.