Hokkaido Dog Price – All You Need to Know 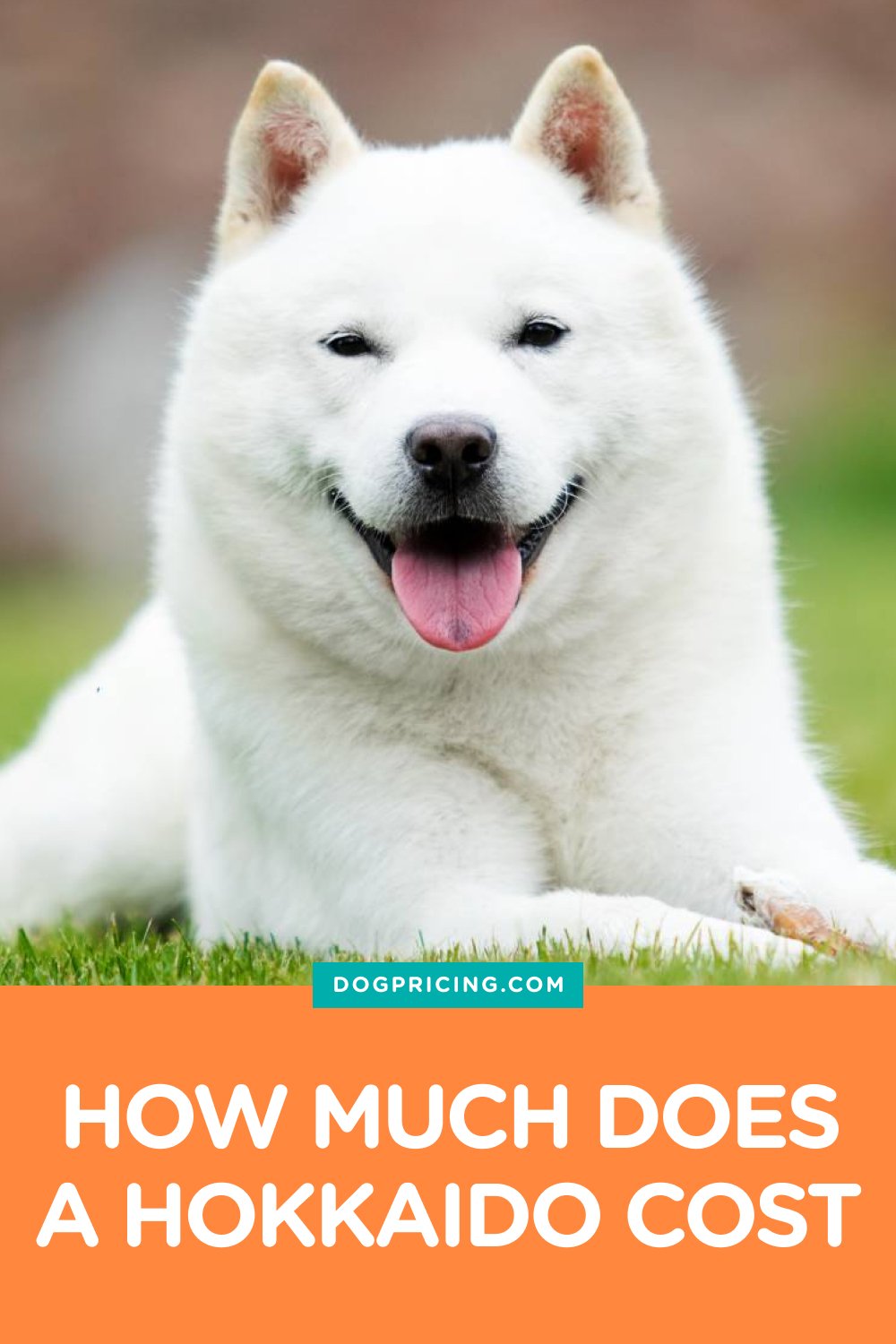 The Hokkaido is a rare dog breed that belongs to the spitz family and is considered a medium-sized dog.

Hokkaido is a very energetic dog, and this dog breed has well-developed secondary sex traits. It is perfectly balanced, has a sturdy build, and robust bone structure. The breed is able to survive extremely low temperatures and significant amounts of snowfall. Its ripped, strong muscles give it an incredible amount of stamina.

The breed is renowned for several characteristics, including its loyalty to its owner, fearlessness, and ability to resist the cold.

Because it possesses an intrinsic sense of direction as well as a sense of smell, it is able to find its master regardless of the distance between them.

The ancestry and the environment in which a person was raised both have an impact on their temperament.

If they have been reared with children from the time they were puppies and have had adequate socialization, they are okay with kids. Children should be instructed on how to demonstrate leadership abilities, and dogs should be educated to accept the child’s authority.

The Hokkaido dog is a bold, loving, and clever companion. They belong to the dog family that is considered native Japanese spitz breeds, and they have origins that date back approximately 7000-8000 years, making them one of the oldest breeds.

Their earliest recorded history occurred between the years 300 and 710 AD when the indigenous Ainu people (and, eventually, their hunting canines) were forced off of the mainland of Japan by the Yamato people and up onto the northern island; of Japan called “Hokkaido.”

During this time, the Yamato people also brought their hunting dogs with them. The Ainu tribe and their canines have, through the course of time, developed to be able to live in a harsh environment and endure the bitterly cold winters.

The dogs evolved to have thick coats that were resistant to the elements, enormous paws, tiny ears, massive chests, powerful jaws, and other robust traits.

They were held in high regard by the Ainu people because of their courage, devotion to their religion, and ability to hunt enormous animals. The Ainu people traditionally hunted bears and deer for food, and their well-known bear dogs were essential to their way of life.

The breed was once known as the “Ainu Ken,” after the clans who were responsible for its development; however, in 1937, it was recognized as a living monument in Japan, and its name was subsequently changed to “Hokkaido Inu.” In modern times, most local people will refer to the species as the “Hokkaido Ken,” where ken is the Japanese word for the dog or just the Hokkaido.

But what about the present day? Is this dog still worthy of today’s modern community? If yes, what’s its price?

The price of a Hokkaido dog often falls somewhere in the region of $1,200- $1500. You won’t find many specimens of this particular dog breed outside of Japan very often. The expense of transporting the dog will frequently outweigh the cost of the dog itself. Some top breeding lines can go for much more than $3000.

Adopting a dog rather than purchasing one, which typically ranges in price from $300 to $400, is another convenient way to get this dog breed.

Aside from that, the first year’s costs for this breed are roughly $6,000 (including the cost of the pup), and after that, they will average approximately $2,000 per year. It is predicted that the total cost of ownership of a Hokkaido dog over its lifespan would be around $30,000.

Where can you adopt Hokkaido puppies?

Adopting Hokkaido puppies/dogs through a rescue organization specializing in these dogs would be the simplest method.

A local search for breeds on google is an excellent way to start looking for a new Hokkaido dog puppy. The search will provide all of the Hokkaido that is currently available in your region.

Both the bloodline and the breeder’s reputation are important

If both of the Hokkaido’s parents are purebred dog breeds of show quality that originated from a reputable breeder, then the price of the Hokkaido dog will be significantly increased to reflect this.

See also  How Much Does a Catahoula Leopard Dog Cost? 2022 Guide

Evidence of registration or a pedigree

There are kennel clubs that certain breeders are members of, the most well-known of which is the American Kennel Club (AKC).

They can also register their breeding canines and puppies, which would bring their total costs even higher. So, registered Hokkaido dogs are a little more costly than unregistered dog breeds.

Either purebred or a mix

The price of a Hokkaido dog puppy that is six months old is more than an eight-week-old Hokkaido dog. Additionally, it is a known fact that mature dog breeds, including Hokkaido dogs, are much lower than their respective breeds of puppies.

Training as well as sociability

Some Hokkaido breeders sell their canine progeny once the animals have been adequately socialized and trained.

It will result in a rise in the cost of the puppy, but it will save you money in the long run since it reduces the likelihood that you will have to spend additional money on the Hokkaido’s training and increases the possibility that the dog will grow up to be well-mannered.

The availability and demand of puppies in the area will affect the prices. For instance, in rural regions, where people often live on big farms, Hokkaido has a tendency to be more popular.

Breeders who take their profession seriously will have their breeding Hokkaidos and puppies examined and tested for various diseases and disorders.

In addition, before selling their puppies, some people may take them to the veterinarian for a checkup, treatment for worms, vaccinations, and the insertion of a microchip. Although the price goes up due to this, there is less of a chance that the dog will be unwell.

Hokkaido’s price varies according to its coat color and type. Hokkaido dogs normally fall into the category of double coat breeds. So, coat type and color also affect its price.

Some Other costs related to Hokkaido

It is generally suggested that a Hokkaido have professional training (either in private training or group training). This training should be anywhere between $1000 and $1,500.

This does not include the cost of having your pet spayed or neutered, which typically ranges from $300 to $350.

Most Hokkaido owners should conduct their own grooming of their dogs because this dog now has hair. Those who want to have their dog groomed professionally should anticipate making anything from four to six trips to the salon per year.

Depending on the Hokkaido size and the required services, each appointment should cost between $50 and $60.

Hokkaido dogs dislike getting showers since their thick body coats take a long time to dry, but other than that, they are recognized for being clean pets who don’t have any smell. However, this breed is predisposed to several health problems, including hip & elbow dysplasia, collie eye anomaly, and luxating patella. 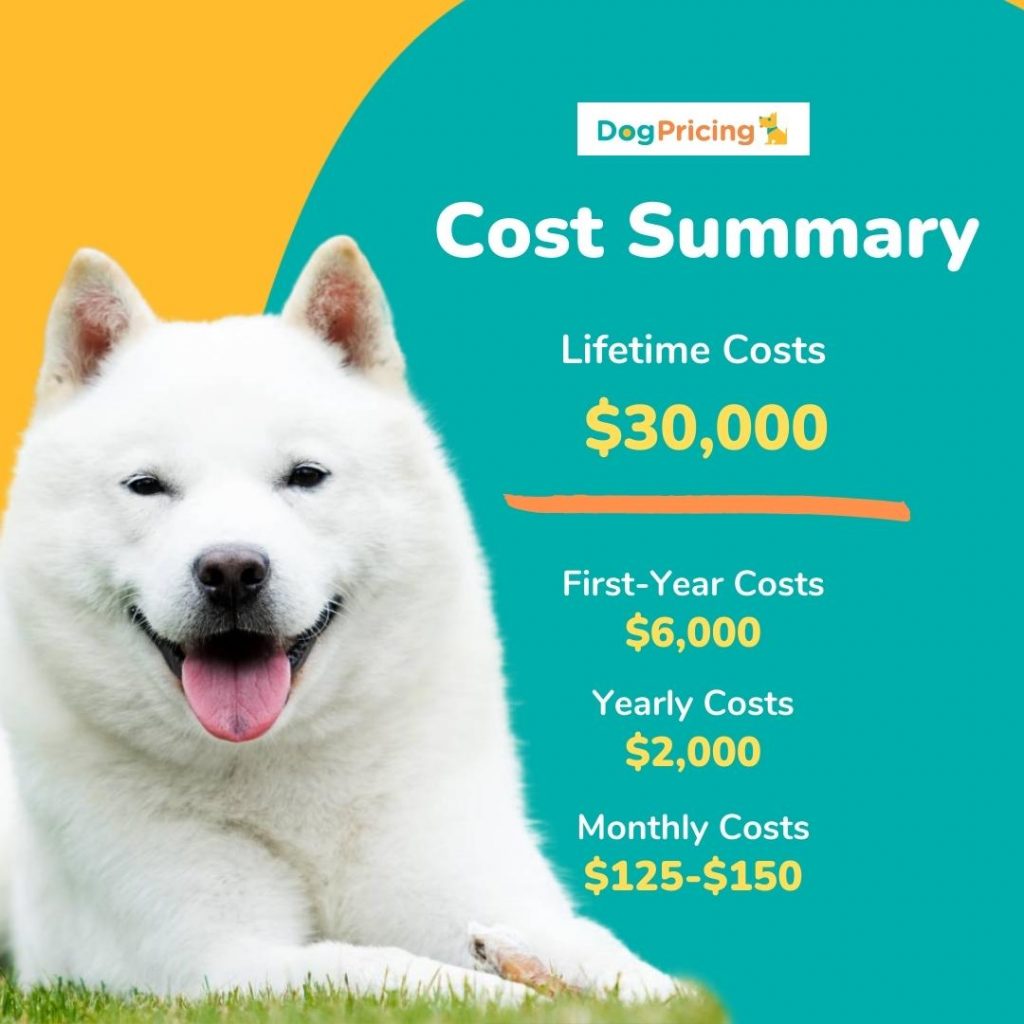 Hokkaido puppies are not common, particularly in America, so expect to pay about $1,200 for each pup. The price can also depend on the age, coat, and whether you’re looking for a show-standard dog. For show standard or champion dogs price may rise up to $3000.

However, the Hokkaido dog is a very active breed, and people of cold climates love this dog breed.