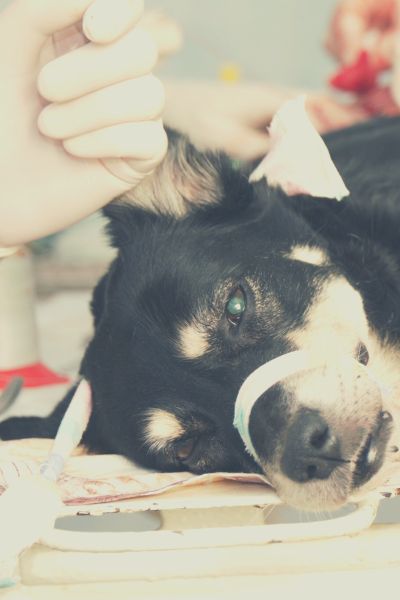 As dog owners, we always strive to help our pet and relieve it from pain whenever possible.

Oftentimes, we are the proud owners of young mischievous puppies, that either love to chew and eat all the things that they shouldn’t or they just run around like crazy dogs and end up hurting themselves.

Sometimes, Jack the jack russel terrier has the idea of being the man of the house and marks his territory.

And then we have our seniors… they don’t say for nothing that oldies are goldies! They may require a bit more TLC at the end of the day.

So, in this article, we will try to give you an estimation of the cost for some of the most common surgeries that you may need to face when owning a dog.

1 – Spay and neuter costs for dogs

The term spay refers to removing the ovaries and uterus from a female dog and neuter means removing testicles from your dog. Both procedures are done under general anesthesia and young and healthy animals usually recover just after a few days.

Factors like age, breed, the type of veterinary hospital, and where you live will affect the cost for spay. In general, the price may vary between $50 and $500.

While the neuter is not as complicated a procedure as the spay, the price range is around $35 to $350.

In some places, this could mean that you have also covered the pre-op assessment, anesthesia, and postoperative drugs that you take at home with you. The price may increase if the dog is older or has a pre-existing condition that requires management before the surgery.

This type of surgery is probably one of the most expensive ones because they are quite versatile. Usually, the most common orthopedic procedures are:

This is a condition where the dog has one or two abnormal formations of the hips, which if left untreated will cause further deterioration in the joint and will leave your dog in a constant state of pain.

The surgery for this procedure will most likely cost you between $3000 and $7000.

Read more here about the cost of the dog hip replacement.

Dogs are prone to rupture of the cruciate ligament in the knee, which leads to unstable knee joining that over time will most likely develop arthritis.

Read more here about the cost of the TPLO surgery.

This spinal disease occurs when one or more intervertebral disc herniates which results in compression of the spinal cord. This could then lead to pain and loss of movement.

This complicated procedure will help your dog, but it will also cost you between $2000 and $4000.

This procedure is used for minimally invasive diagnostics and treatment in the joints where the surgeon makes a small incision and inserts a camera in the joint, as well as other tools needed for the treatment.

Depending on the complexity of the fracture and its location, expect a price between $500 and $5000.

A condition called gastric dilatation-volvulus is a very serious and life-threatening condition that affects large breeds of dogs that have deep chests.

In this case, the stomach becomes distended and filled with gas, which then leads to twisting, which consequently affects breathing and normal blood circulation. If left untreated, it can lead to certain death. This occurs when the animal is fed a large meal and is left to run and be active afterward, without giving it a break from the meal.

The procedure that treats this is called gastropexy and it basically means returning the stomach to its original position and sewing it to prevent occurrence.

Since this is a major surgery that may require stabilization prior to surgery, as well as postoperative monitoring, the price may range between $3000 and $6000.

Some dogs just love to put stuff in their mouth and eat them. Toys, socks, and balls are just one of the most common things your dog may ingest. Oftentimes those things get stuck and cause obstruction, which could be potentially life-threatening.

In cases when your dog needs surgery, the price may vary between $2000 and $3500. However, if your pooch is one of the lucky ones, the foreign body may be removed endoscopically which will cost you between $800 and $2800.

Your pug or Pekingese got into a dog fight, and got his eye hurt beyond salvage? This is a case where unfortunately your furry friend will have to go through enucleation and may need to wear an eye patch and become known as Captain Wolf.

This would probably cost you between $500 and $1000, and there may be additional expenses for certain drops, which could cost around $25.

Franky the basset hound had a nasty ear infection and flapped around his itchy ears all the long. And he got himself an aural hematoma. This situation requires surgical intervention.

7 – Mass removal and biopsy in dogs

This is a pathology that we most commonly see in senior pets, however, younger dogs are not excluded. The price of this procedure will vary depending on the age, type, and location of the mass.

In cases where the mass is located on the skin, you could be charged between $200 and $400. However, if it’s an internal mass removal, and the surgery is more complex, you could expect a price between $1000 to $2000 and maybe even higher.

This surgery is usually performed in cases when your dog shows signs of discomfort when going to potty or you notice him/her that has not been in the toilet for a few days. Bladder stones are confirmed usually via ultrasound and x-ray diagnostics and in most cases, the treatment involves surgical removal of the stones.

The treatment will probably cost between $1300 and $2800 dollars. Oftentimes, the dog may require special dog food afterward in order to prevent this situation from occurring, which may increase the cost in the long run.

You have a bitch that goes into labor but as time passes she still hasn’t given birth to a pup. You usually start to panic and worry, and in a way you should. But stay calm enough to inform your vet or call the emergency clinic and let them know you are on your way. Complications may arise if left untreated and we strongly advise you don’t wait for too long. In cases like this, talk to your vet and get information about when it’s best to bring the bitch, or maybe consider talking about planned c-sections..

This life-threatening situation occurs in older bitches, but lately, it is not uncommon to be seen in younger bitches, usually after they have their heat. This is a condition where the uterus and the uterine horns fill up with puss. Pyometra could be open, which means that you may notice some gooey discharge coming out of your dog’s vulva, or it can be closed, and those cases are usually harder to diagnose and require immediate attention.

Depending on the situation and the condition of the dog being brought in at the hospital, the price for this surgery may vary between $1000 and $2000.

This condition is most commonly seen in brachycephalic breeds of dogs such as the pug, Pekingese, and french bulldogs. The syndrome is a combination of several problems which include stenotic nostrils, long soft palate, tracheal hypoplasia, and laryngeal collapse. Dogs that suffer from BOAS have difficulty breathing properly and they can snore quite often. They may show.

In this case, investing between $700 and $1300 will most likely make your pooch breathe easily and certainly save you from buying earplugs for yourself.

Many times dogs may require tooth extraction due to different reasons. This procedure could range from straightforward tooth extraction to a more complex one where flaps and tooth cutting are needed.

Entropion is a common disease of the eyelids, where the upper and lower lid turns towards the eye. This causes irritation and could potentially cause corneal ulceration, which if left untreated could lead to your dog losing his eyesight and the eye itself.

It is estimated that this procedure could cost you between $500 and $1500.

This is a condition where the lens of the eye gets cloudy and blurry, which leads to an impaired vision for your furry friend. Even though this is usually seen in senior dogs, there are conditions that could lead to cataracts in younger dogs too. The procedure usually involves removing the blurred lens and putting an artificial one in the eye.

For this, you should be prepared to pay between $2500 and $4000. In some cases, the price may vary, because patients usually require lifelong eye drops.

Even though the price may vary depending on the difficulty and complexity of the procedure, the surgery will most likely cost you between $1000 and $2000.

Other less common surgeries in dogs

This surgery is also known as sialoadenectomy and it involves removing one or more of the salivary glands due to inflammation or cyst formation known as sialocele.

Read more here about the cost of salivary mucocele surgery.

Perineal hernia in dogs occurs when the perineal muscles are no longer able to support the rectal wall which leads to its distention and abdominal organs begin to move in.

This type of surgical correction costs between $500 and $1500. In some cases, additional may be charged for clinical examination and/or imaging.

The spleen is an organ that stores large amounts of blood in the body and helps in the elimination of toxins. Usually, when there is trauma or a tumor it could rupture which could potentially lead to bleeding out.