How much does tumor removal surgery cost in dogs?

It is not uncommon for dogs to get these sinister illnesses too. Unfortunately, they do pretty much the same damage that they do to human organisms too.

And with age, small simple pimples on your dog’s skin may turn out to be something that could potentially be life-threatening. This is why, a regular check-up at the vet’s office, especially when your dog hits senior years is a must.

Before we can go on and discuss some of the most common tumors found in dogs, let’s first give some explanation on what some specific words mean, which may help you understand when you talk to your vet.

A few more terminology that is also important for dog owners are:

Malignant tumors: or cancer, spreads in the tissue via metastasizing in the surrounding tissue. How fast the cancer will spread tells the vet how aggressive the malignant tumor is, which ultimately gives the prognosis.

Benign tumors: these tumors are what people call “good” tumors. They don’t have the ability to spread in surrounding tissues. However, they still need to be removed or treated accordingly.

Symptoms and diagnostics for tumors in dogs

Many times owners are able to notice that something is growing on the skin of their dog, which concerns them and they take it to the vet only to discover that it is not a good thing. However, more often, the tumor or cancer could hide itself inside, which makes even the vets reconsider twice before giving the final word.

In case, you do notice some of these symptoms, a quick visit to the vet would be advised:

Whenever you visit your vet, he will always start with the basic blood work and biochemistry, which could cost you between $150 and $1500, depending on the panels your vet chooses.

Furthermore, he will probably do an ultrasound check-up, which could cost you between $250 and $550.

X-ray check-up is also another tool that the vet may utilize and it would probably cost you between $120 and $350.

Advanced imaging is always recommended when the vet suspects an internal tumor or cancer, so scans like CT will cost you between $1200 and $2600 and for MRI you may be charged between $2500 and $5000.

Most common tumors in dogs

Below we will try to give you an insight into some of the most common tumors in dogs and how much the surgery to remove the costs.

This bone cancer is one of the most common cancers seen in dogs. It usually affects larger breeds of dogs and it can progress very fast, which means it is aggressive. The treatment usually requires surgery to remove the affected limb, as soon as possible.

Usually, when it is diagnosed, it has already metastasized in the local tissue and lymph nodes. Treatment is usually via the removal of the tumor followed by chemotherapy.

The surgery will probably cost you between $1000 and $2000, without the chemotherapy.

This is a tumor of certain cells called mast cells that usually are found in the connective tissue of the skin.

Even though this type of tumor is usually benign, the cells themselves could cause issues, since they release histamine, which could lead to inflammation in the dog’s system.

The treatment is always surgery, where the surgeon makes a good cut with as clear margins as possible, making sure that all of the affected tissue is removed. In some cases, radiation is also recommended.

This type of tumor is more seen if female dogs after 6 years of age and if they are not spayed.

On rare occasions, they can develop in male dogs. They are not invasive and they can grow slowly but they still need to be regularly monitored by your vet.

Usually, whenever they are noticed, and if the bitch is not spayed, it is recommended to be done as soon as possible.

The tumors are removed surgically and on some occasions the vet may recommend chemo.

The surgical procedure is called mastectomy and depending on how much the tumor is spread in the mammary gland, it may be recommended either partial or radical mastectomy, meaning that the whole side should be removed. This may cost you between $500 and $5000. Prices may vary between different hospitals and referral centers.

These benign growths on your dog’s skin contain fatty cells that may look bad and feel off wherever you go through your dog’s fur.

They may grow but this type of tumor is slow to expand. It is one of the most common tumors seen and they are more common in senior dogs. In some cases, they can be malignant but then they are known as liposarcoma, however, they are rare.

Even though they do not cause any issues, if the tumor is located on the body where it can interfere with the normal life and comfort of your dog, we recommend that you visit the vet so they can be removed.

This surgery will probably cost you between $200 and $600. However, if the tumor is located in a more specific place, the price may increase.

This cancer affects the blood vessels throughout the body and it can be located in different organs like the skin and the heart. However it usually is found in the spleen. It is one of the life threatening cancers as it progresses very quickly and it is aggressive.

Surgery is always an option for treatment but it can be dangerous because it could lead to huge blood loss. It is not uncommon for owners to decide to put their dog to sleep.

However, if you decide to give your dog a chance and choose surgery, expect to pay between $500 and $5000.

Fibrosarcomas are aggressive formations that contain cells called fibroblasts, which can be found in the connective tissue, skin, and bones.

Even though this is an aggressive tumor, it usually does the damage locally, as it rarely metastasizes in other tissues.

This tumor is usually treated with complex surgery, however, due to its nature, many of the patients suffer from occurrence quite fast after the initial removal.

The surgery for this type of cancer would probably cost you between $1000 and $3000.

As the name explains, this is aggressive cancer that affects the lungs. Even though it is more common for a vet to see a metastatic tumor in the lung, this type of cancer is usually a primary lung tumor in dogs.

The treatment is almost always with surgery that is called lung lobectomy, meaning that the affected lung needs to be removed.

Sometimes dog owners can notice small formations on their dogs’ eyelids. Even though at the time they may not bother the dog, they may cause some discomfort as the dog tries to scratch them, which could lead to irritation and potentially harm the eye itself.

A quick visit to the vet and a scheduled surgery that should be pretty much straightforward would definitely make your dog feel much better.

Removing the tumor from the eyelid will probably cost you between $250 and $650.

These are the most common tumor formations in a dog’s mouth. They usually are benign but on some occasions, they can become invasive and grow in the surrounding tissue.

They usually are small protrusions on the gum that have a pinkish color. Your vet will most likely recommend removing them through surgery.

This procedure would probably cost you between $300 and $800.

This tumor is commonly seen in dogs’ mucosa and around the lips and mouth and is viral in nature. That means that it is usually caused by the canine papillomavirus type 1, which is highly transmissible.

The virus causes the formation of thousands of small clusters of wraths that can be located on the gums, the lips, or the tongue.

Even though this type of tumor is not usually treated with surgery, there may be cases when it is recommended, especially if it’s causing pain or it gets constantly infected and it bleeds.

However, your vet might suggest that after the surgical procedure, the dog should continue treatment for the tumors that could not be removed. This may increase the total price.

The surgical removal of this type of tumor might cost you between $300 and $2500. 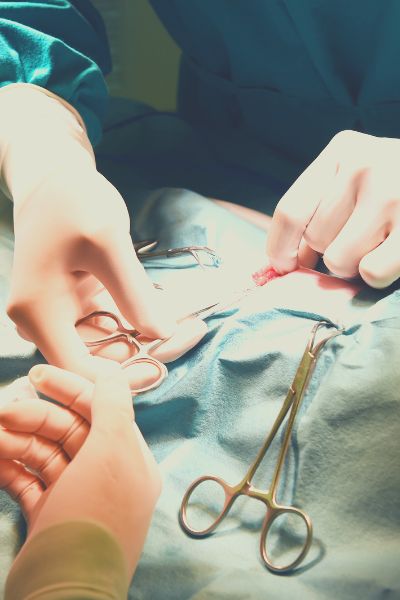