The first question to consider is the Merle English Bulldog’s price. This can depend on many factors and could vary based on color variations such as lilac merle, tri merle, etc. The price also depends on the factors like the breeder’s reputation, the pup’s age, bloodlines, and the area the breeder is located in.

In this guide, we cover all Merle English bulldog prices so you can get an idea of how much to pay.

How Much is a Merle English Bulldog?

Expect to pay anywhere between $2500 and $35,000 for a merle English Bulldog from reputed breeders. This price could vary based on the breeder’s reputation, the merle color variations in the dog, and also the area you live. 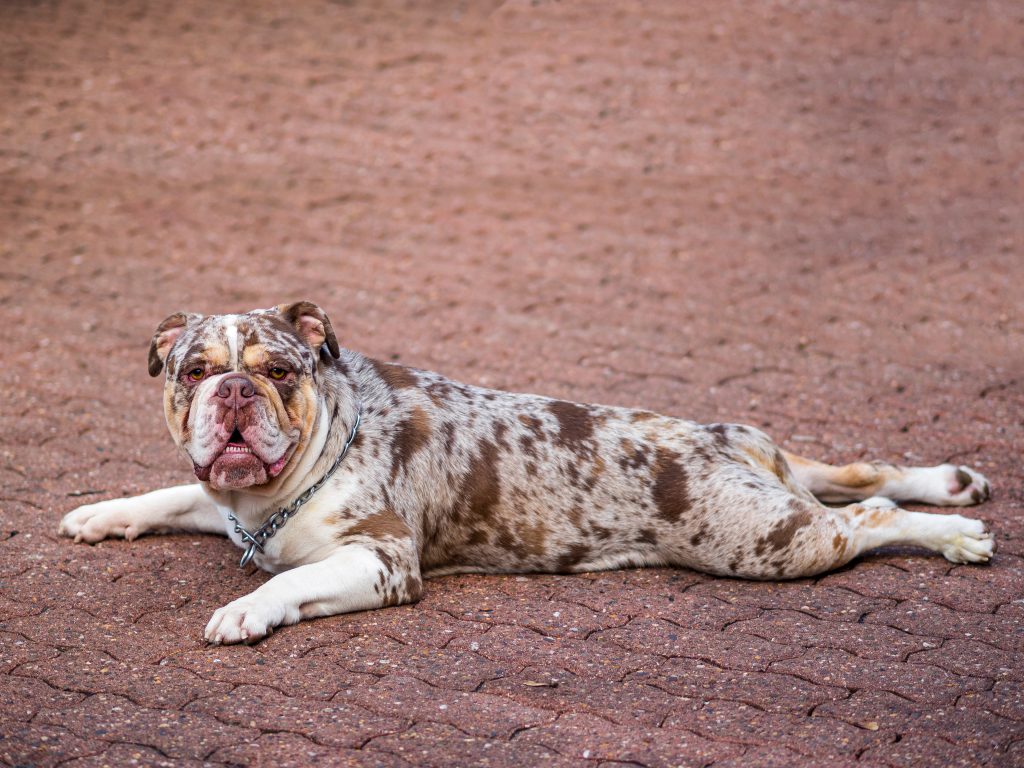 What are Merle English Bulldogs? Why are They So Expensive?

Merle English Bulldogs have an incompletely dominant M gene which dilutes dark colors. Therefore, these dogs end up with a marbled or mottled appearance wherein there is a true basic color and a paler color in the diluted parts. As mentioned earlier, there are several variations in the merle pattern – so you could have blue merle, lilac merle, tri merle, chocolate merle, etc.

The reason why merle English bulldogs are so expensive is due to their beauty, rarity, and uniqueness. The merle coloring creates random patches and patterns that are unique to each dog. No two merle puppies are the same, even in the same litter. Moreover, merle English bulldogs often have light-colored eyes or blue-grey eyes that make them look gorgeous.

Since people want rare and beautiful pets, merle English bulldogs are in high demand. This demand has led breeders to breed specifically for the merle pattern. Many breeders even aim for beautiful merle patterns like red merle, sable merle, lilac merle, etc.

Merle-colored English Bulldogs are also rare – as they are not recognized by various kennel clubs and are not allowed to participate in dog shows. Therefore, many English bulldog breeders who breed only show-quality pups refrain from breeding them.

All these factors have increased the Merle bulldog’s price. There are also some general factors that affect puppy prices: 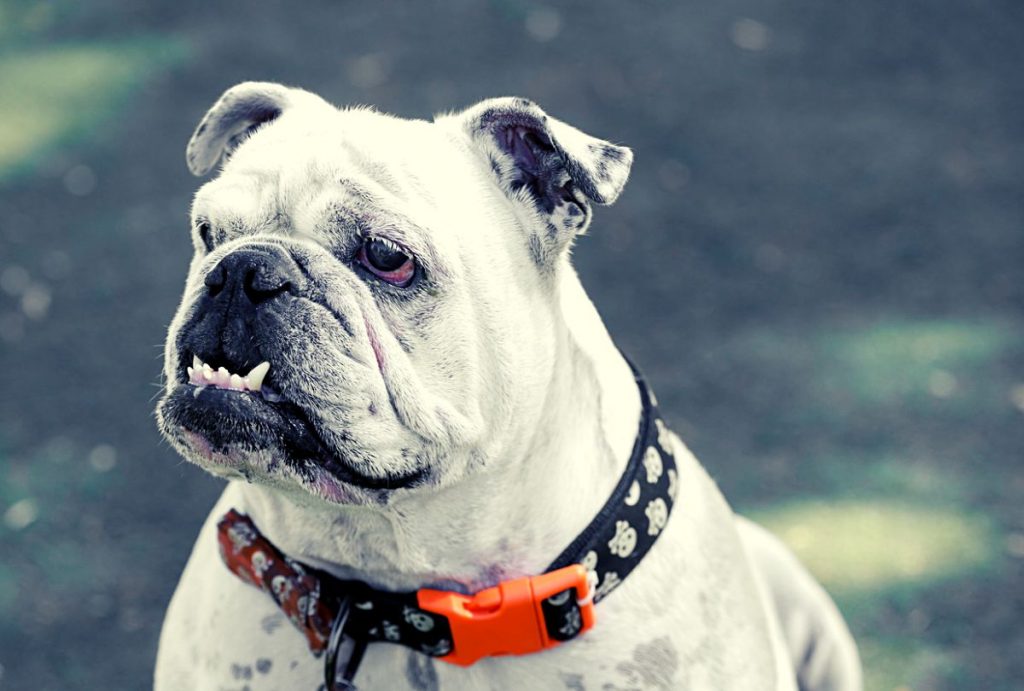 As mentioned earlier, merle English bulldogs often come with beautiful color variations in them and these can even cost higher. Sometimes rare merle colors like blue merle, chocolate tri merle, sable merle, and lilac merle can cost between $3000-$35,000. (We will cover the costs of these Merle English Bulldog variations later in this guide.)

Older pups that are trained by the breeder often cost higher. Often they are potty trained, socialized with kids and other dogs, and have even received some basic obedience training. In short: these confident little pups are ready for going to their forever homes. People are willing to pay higher for trained English bulldogs and breeders are more than ready to oblige.

Pups with superior bloodlines cost much more than those born to bulldogs who are not registered or champions and title owners. Naturally, merle bulldogs are only born to merle bulldogs but there may be outcrosses too.

Do note that merle genetics could result in deaf and blind pups. Therefore, good breeders use scientific know-how to only breed dogs that won’t have these issues. Ethical breeders may conduct genetic tests and health checks to ensure healthy merle puppies.

Top breeders often charge a lot more just on the basis of their reputation and popularity. This is because of the fact that they have spent time, money, and effort in breeding unique merle-colored Bulldogs. As stated before, they even conduct health checks on the breeding dogs to rule out vision-and-hearing-related issues in the pups.

Let us now discuss the prices of different variations of merle English bulldogs.

Variations in Merle English Bulldogs and Their Prices

Here are some common variations in merle-colored English bulldogs: 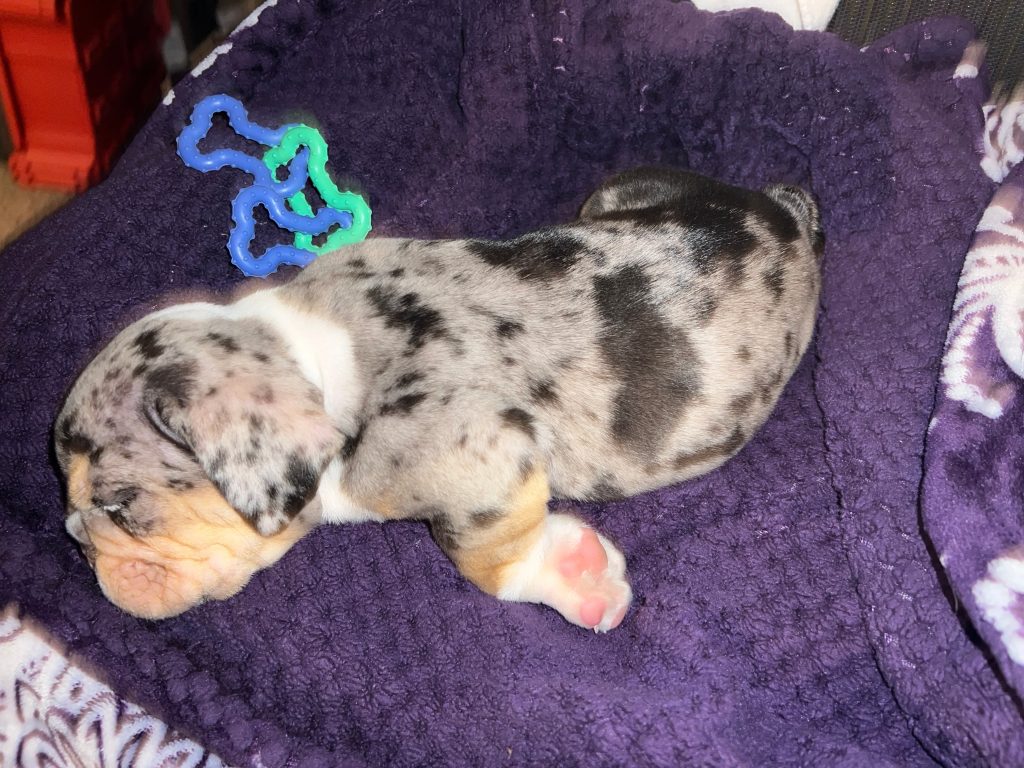 As the name indicates, these dogs have tri-colored coats with mottled patterns. You typically will see colors like gold-brown, black, fawn, etc. There may be a marbled or mottled appearance on the back, face, and belly. Tri-colored Merle English bulldogs usually cost between $3500-$35,000 depending on the breeder, the puppy’s age, etc. 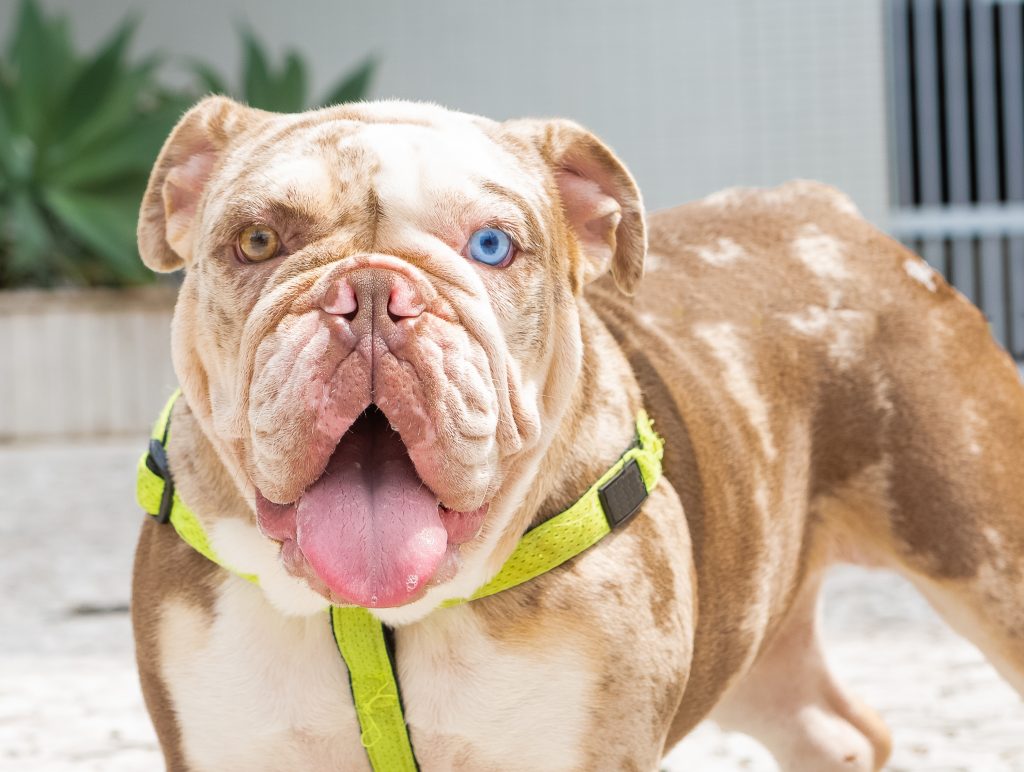 Sable coloring in dogs usually means black color with lighter roots. In some dogs, the sable coloring takes the appearance of brown color. With the merle gene, there is a marbled pattern with brown, light brown, grey, or tan appearance. Sable merle English bulldogs’ price is between $2500 to $10,000.

These dogs have a lovely deep brown base coat with a lighter color pattern sprinkled randomly on the back and the paws. The face typically has large patches of white, cream, brown, or black. The belly and chest could have white or tan coloring. Expect to pay between $3000-$5000 for chocolate merle English Bulldogs.

If you are wondering how much a chocolate tri-merle English bulldog costs, then the answer is around $9000. The chocolate tri merle coloring is very rare which has increased its demand and, hence, the price. These bulldogs have randomly placed stripes of chocolate brown interrupting the base coat color.

The lilac color is light gray or blue but appears almost lilac. It is caused by a recessive gene and breeders breed selectively to get puppies having a purplish sheen on their coats. These dogs often have bluish or grey-blue eyes. Lilac tri merle English bulldog puppies are very much in demand. Therefore, you can expect to pay almost $4000-$6000 for each one.

A black tri merle English bulldog has a base color of black with patterns of blue/grey/cream/brown/reddish patterns. The marbled appearance is only present on the back and the dog’s legs, mouth, chest, and belly may be solid colored.

Some of these dogs have light eyes and sometimes, one eye is dark and the other is light. Black tri-merle English Bulldogs are known to sell for $7000-$10,000! 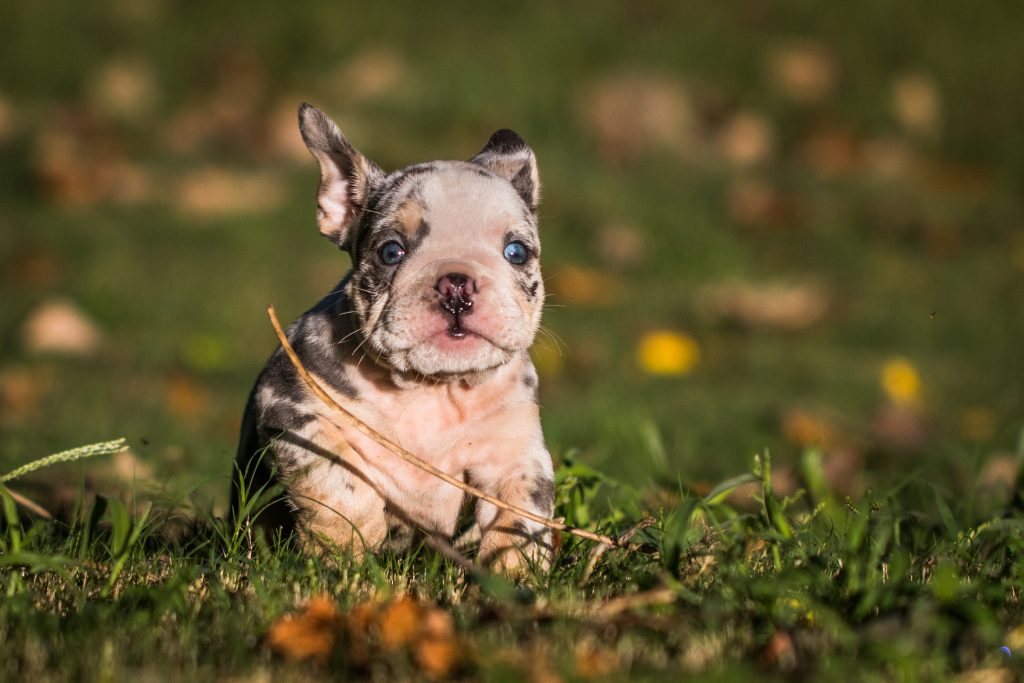 A white base with gray or dark gray mottling can create a bluish appearance resulting in the beautiful blue merle English Bulldog. These beautiful dogs often have the blue merle pattern all over the back and hind legs.

The front legs may be solid colored – typically white – and the belly is white as well. There also may be white patches on the face and head. Blue merle bulldogs are rare, so breeders often grab the opportunity to charge higher for them. Expect to pay between $4000-$10,000 for these pups depending on other factors.

In blue tri-merle English bulldogs, you will see colors like blue, black, brown, white, fawn, grey, and tan. This is an exotic and rare color in Bulldogs so you could shell out between $16,000 and $25,000 for each puppy!

What is the rarest English Bulldog color?

Merle color is considered the rarest English bulldog color. You will find these dogs having beautiful mottled patterns of black or brown over white, cream, fawn, etc. The dominant color may be white, fawn, black, or cream or there may be a mixture of these colors. As stated above, these dogs can cost between $43500 to $35,000 depending on the breeder.

Merle English bulldogs from good breeders can be as healthy as standard-colored Bulldogs. On average, they live for 8-10 years.

What is a ghost merle English bulldog?

Is there a harlequin merle English bulldog?

Yes, Merle bulldogs may have the harlequin coat pattern seen in Great Danes. This consists of black and grey speckling on a white coat. Harlequin merle English bulldogs are lovingly called ‘Marlequins’. 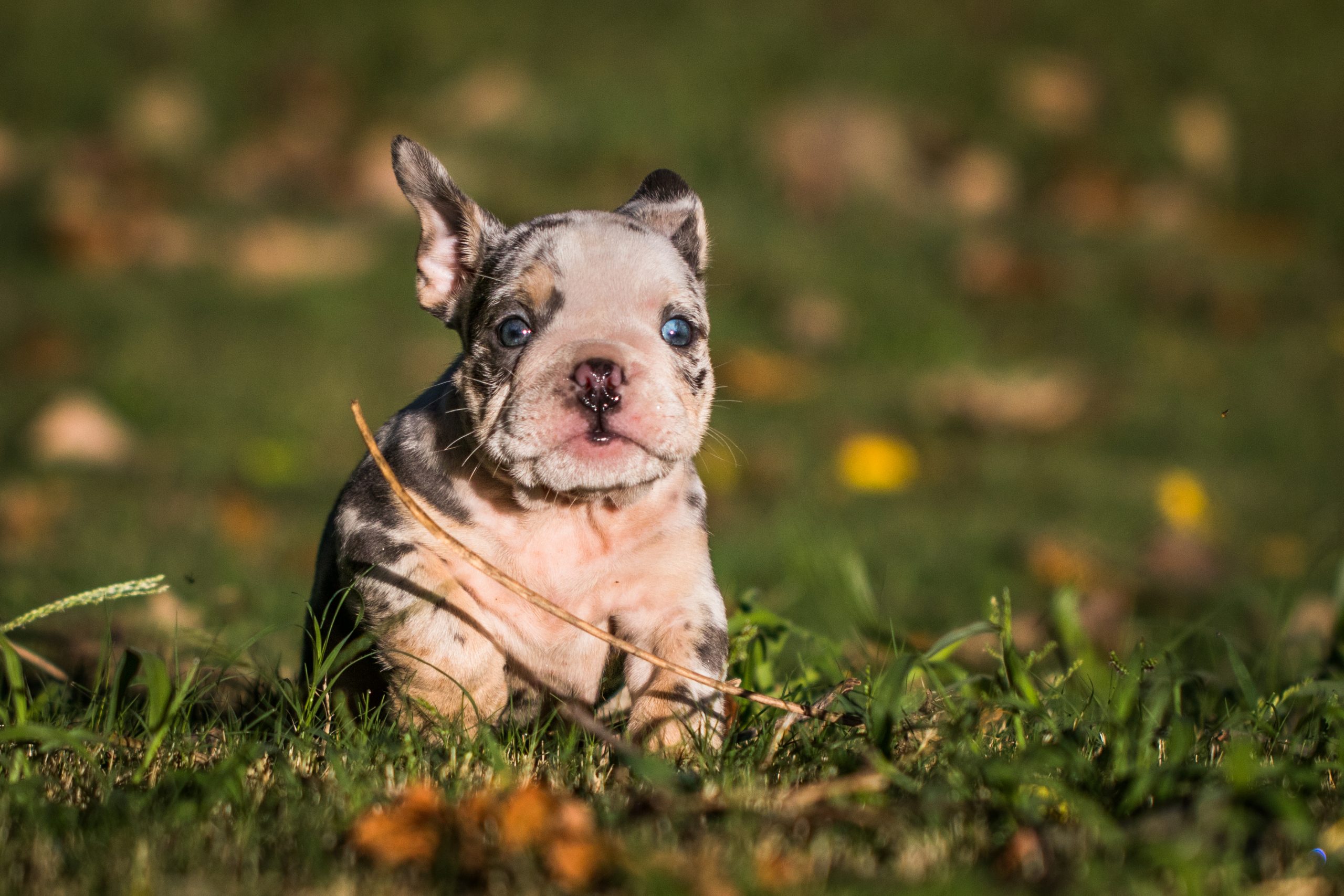