Merle French Bulldog Price: All You Need To Know

Are you thinking about getting a Merle French Bulldog? These highly sought-after dogs are becoming more and more popular. 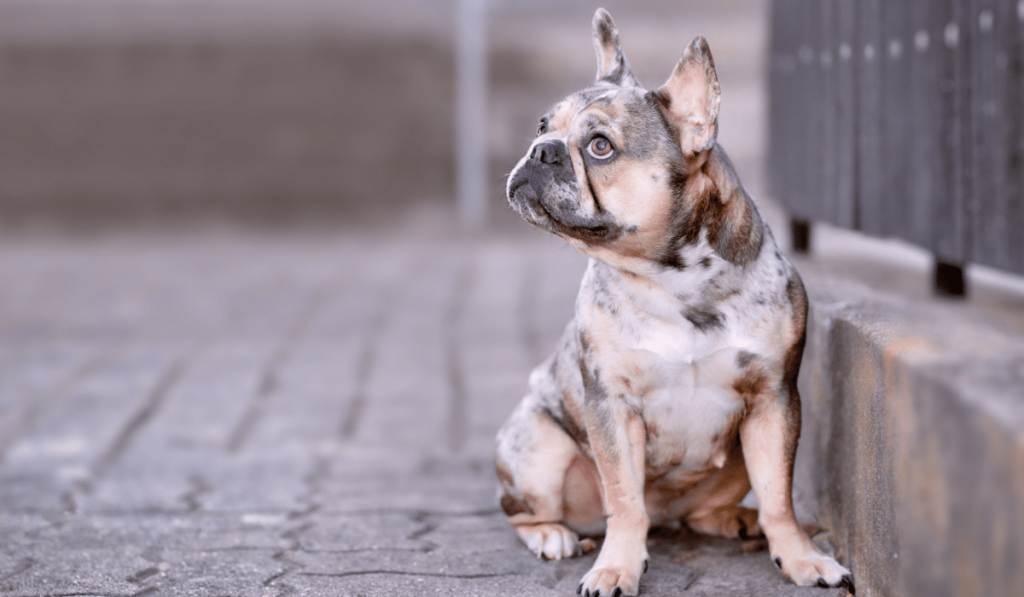 About the Merle French Bulldog 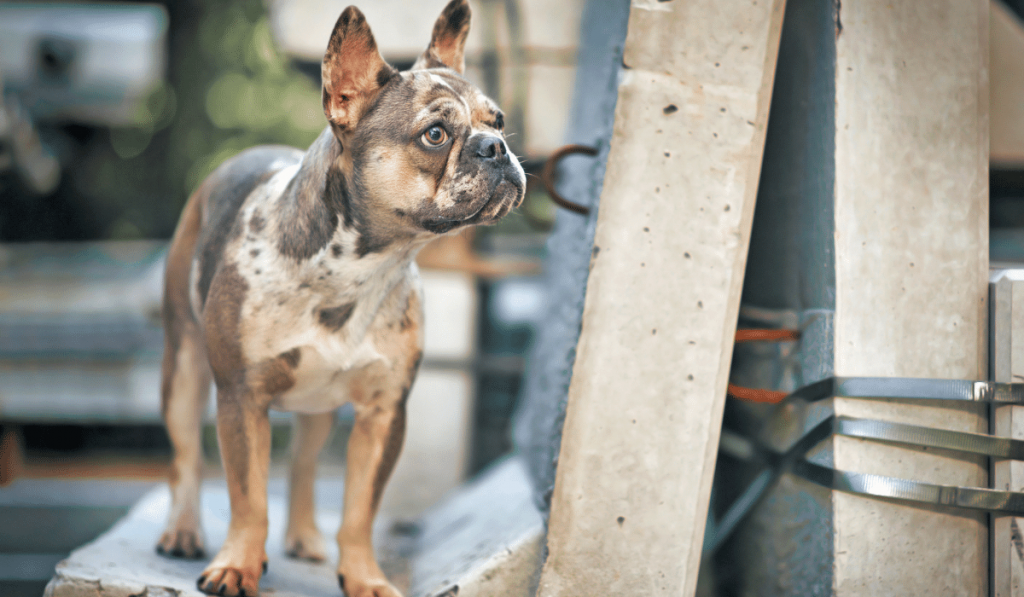 The merle coat is caused by the merle gene. The merle gene is an inherited trait that creates mottled patches on the dog’s coat. It is a recessive gene that affects any area of the puppy, including its fur, eyes, nose, and paw pads. The gene removes pigment in the affected areas, causing the merle pattern.

When a genetic mutation occurs on the iris, it’s known as heterochromia iridium, which is why some Merle French Bulldogs have bright blue eyes.

When one merle dog is bred with another merle dog, one-quarter (25%) of the resulting puppies are called double merles. A non merle cannot result from this breeding.

Double merle puppies have too much pigment removed due to genetics. Some can be born blind, and others will have significant health issues, including those associated with sight and hearing. 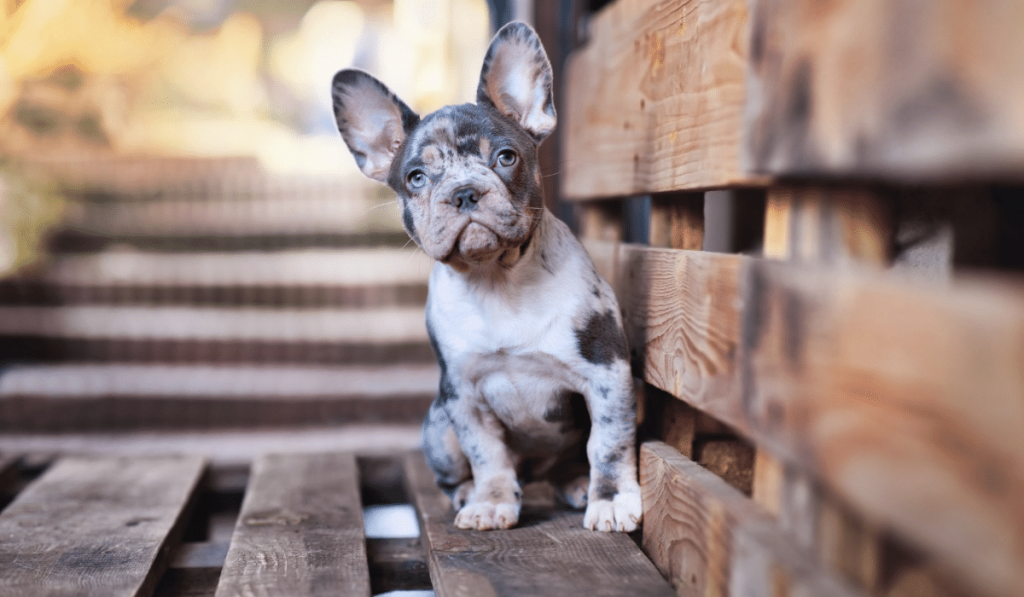 Many dog owners would love to have a merle Frenchie for their stunning, bright blue eyes. However, if you’re considering this colour variation for your new Frenchie puppy, you should know that only the Merle French Bulldog’s eyes will remain blue. This can come with a high price tag!

Some French Bulldogs, such as the Isabella, the Blue, and the Lilac have blue eyes when they are puppies, but they change to brown eyes as the puppy grows into a full-grown dog.

Although there is a misconception that merle French Bulldog puppies have more health issues than normal French Bulldogs, this is not true. They are no more prone to hip dysplasia, immune disorders, heart murmurs, cherry eye, or any other illness than a regular French Bulldog. They have the same lifespan as a standard French Bulldog.

The only health problems that arise occur when two merles are bred with each other, as mentioned above. A standard French Bulldog and a Merle French Bulldog (as opposed to a double merle) have the same likelihood of developing illness or disease. Exotic French Bulldog colours don’t play a role in developing maladies. 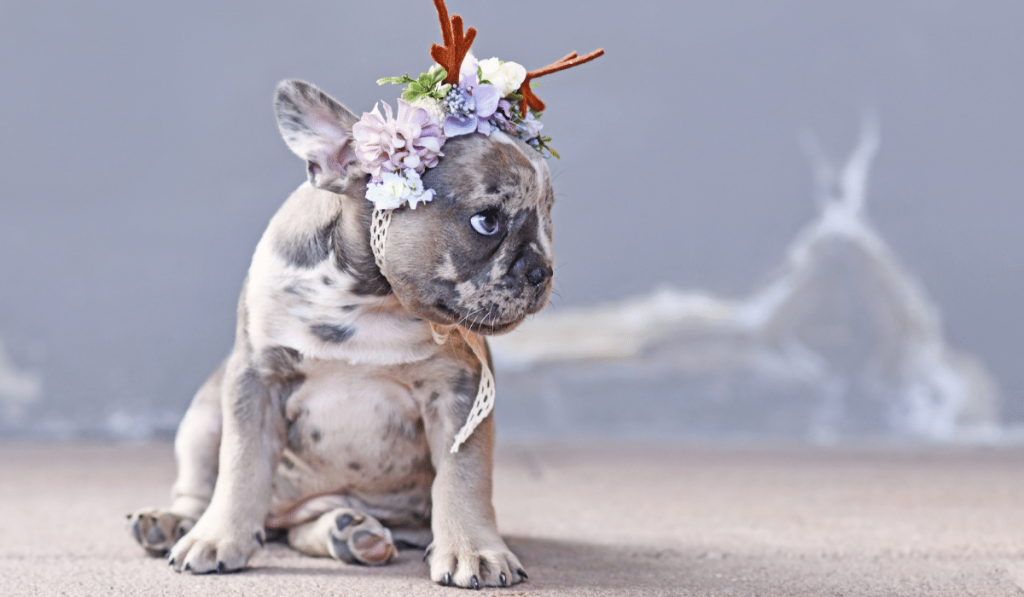 There are a number of factors that will affect how much your Merle Frenchie will cost. Some of these factors are true of all dog breeds. What truly makes the Merle French Bulldog cost so much more is the fact that it is rare and has such unique colouring.

Choosing a responsible breeder is going to be the main factor that determines the price of your Merle French Bulldog. A breeder who is both knowledgeable and responsible knows that two merle dogs should not be bred. A merle bulldog has to be bred with a Frenchie of a solid colour.

The age of the dog you purchase will also affect the price. Purchasing a Merle French Bulldog puppy is going to be more expensive than purchasing an adult. Most dog buyers want to train their puppies from the beginning to ensure he or she is well-socialized and well-behaved. 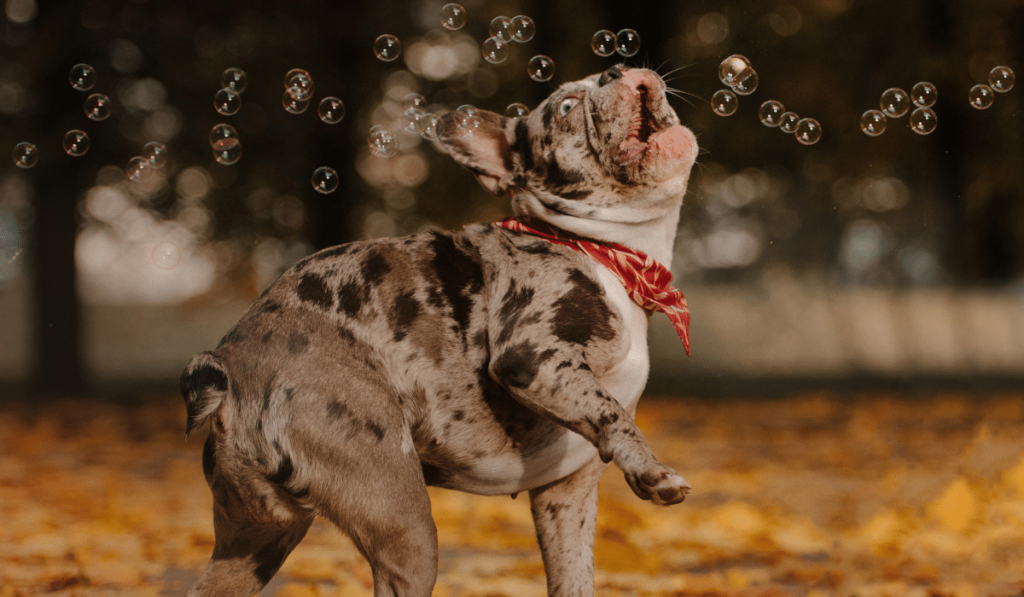 Blue Merles occur when the dog providing the dominant gene is blue fawn (which is actually diluted black, giving it a blue hue). Blue Merles often have unique eyes that are light blue in colour and have a pretty blue pied pattern.

This is one of the main reasons that the Blue Merle Frenchie is so highly sought after! Blue merle with a blue fawn parent is definitely among the most popular French Bulldog colours that buyers are after.

If your new pup has received a lot of vaccinations or had a sterilization procedure done, this can affect the cost as well. Usually, breeders who give pups significant medical treatment and spay or neuter the puppies will charge more to cover the medical costs. 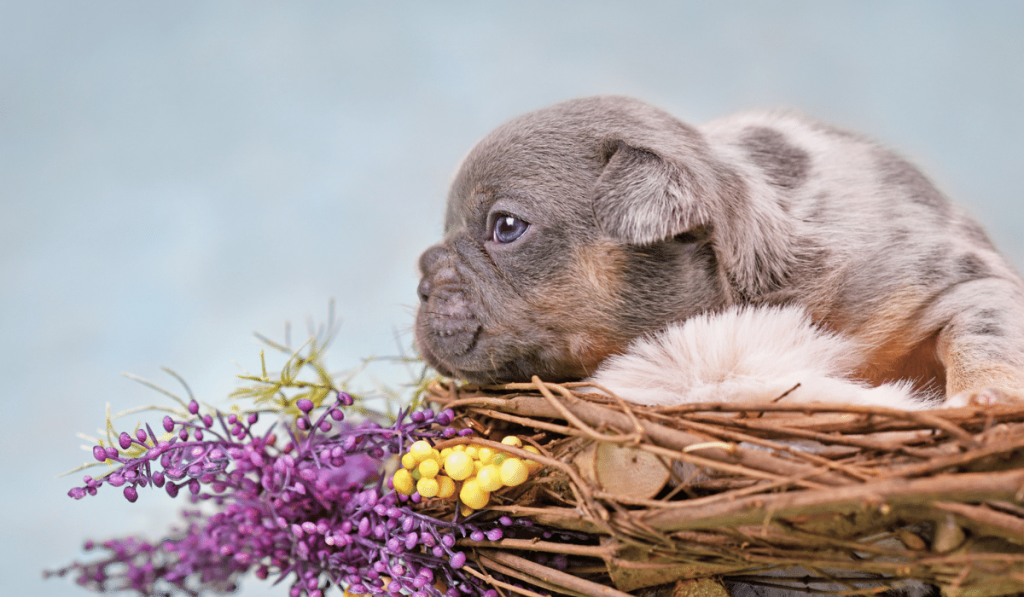 Regardless of French Bulldog colour, the breed usually goes through a 30 lb. bag of food per month. Depending on the brand and quality of the food you purchase, this can run you somewhere between $30 and $60 each month. Merle French Bulldogs don’t have a different diet than regular French Bulldogs.

Routine veterinary visits will probably cost around $500 to $700 each year. Try to do sufficient research to ensure you do not end up with a double merle. Since double merles have significantly more sight and hearing problems, your veterinary care will be much higher annually.

French Bulldogs are typically low maintenance, low in energy, and pretty laid-back pets. Still, they can require some training.

They are sometimes overprotective of their owners, which may prompt you to look into hiring a dog trainer. Depending on your area and the experience of the trainer, this could cost between $40 to $60 per session.

Doggy classes, where your dog does not work with an individual trainer, usually cost between $25 to $80 each. 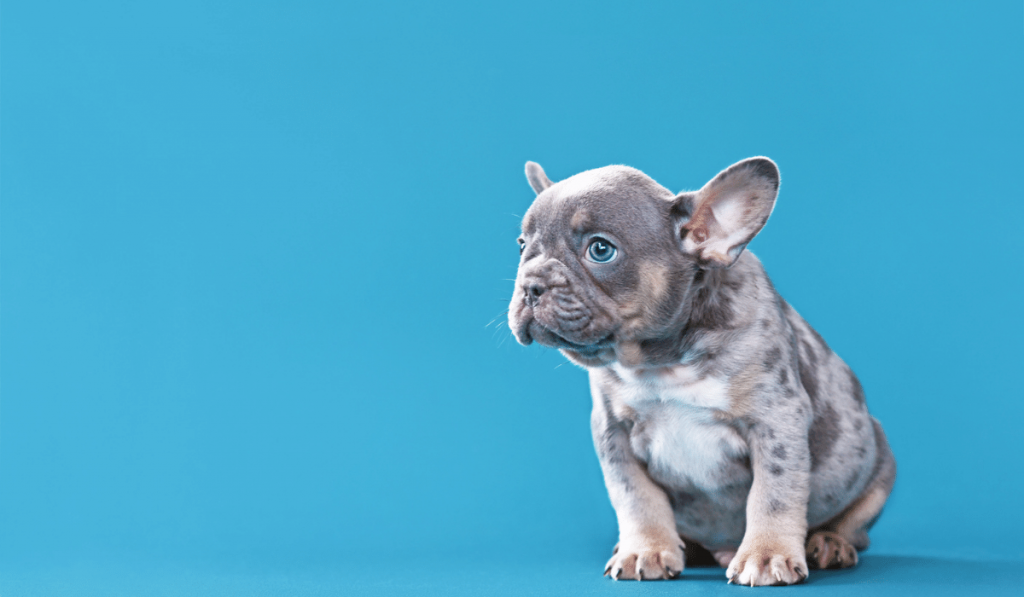 Merles are not typical Frenchie colours. As such, the American Kennel Club does not recognize ‘merle’ as a colour variation. If you choose to get a French Bulldog puppy who is a merle, he or she is unable to become AKC registered.

How Much Does a Merle French Bulldog Cost? 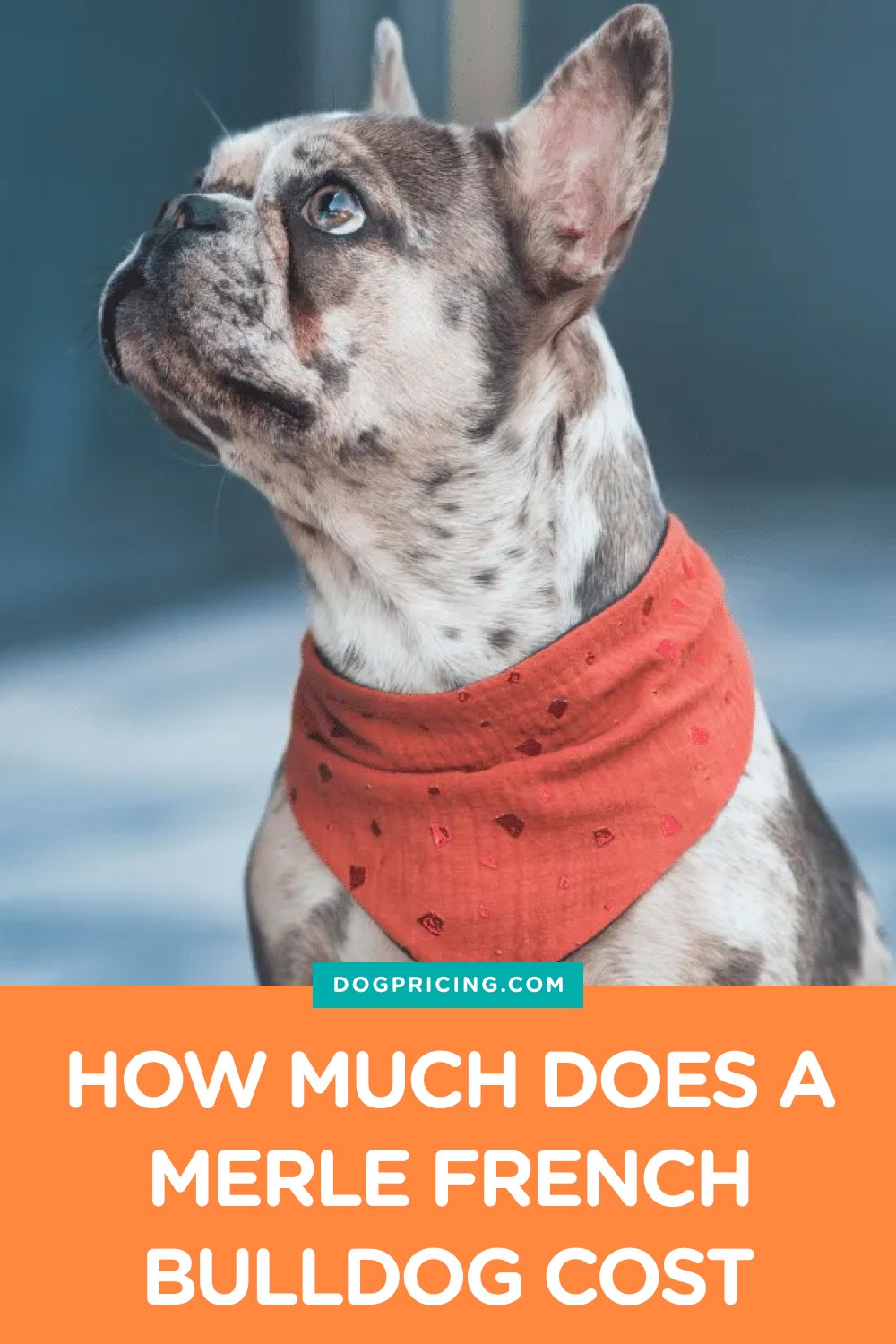